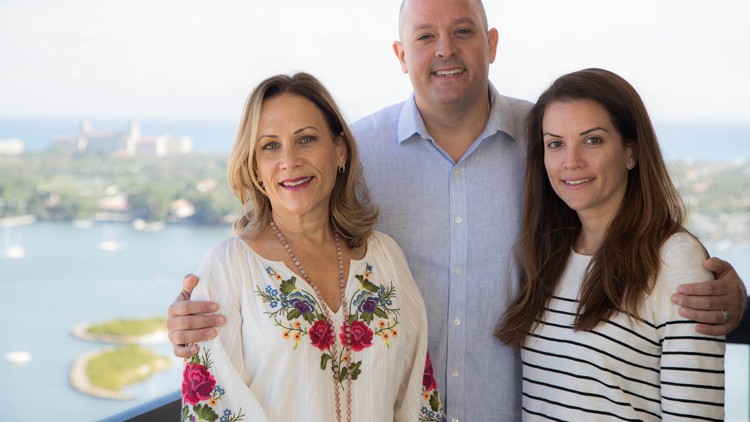 “No one likes to talk about it.”

When Justin Merrell’s father John committed suicide in 2012, after years of battling long-term depression and coping with family illness, well-wishers who knew what happened struggled to find words to comfort the family. So instead of deflecting the awkwardness, Justin decided to let them know it was alright to discuss it. And almost without fail, they started to speak up.

“It was typically a clammy type of conversation, but probably 90-plus percent of the population has an example of their own story,” says Justin, 37. “So I guided their comments, and they would say ‘That felt great.’ Now everyone talks about it.”

The need for that sort of openness about mental health led the Merrells, who own Wellington’s Ultima Fitness, to a partnership with Palm Healthcare Foundation, Inc. for a campaign called “Train The Brain.” It’s a month-long effort to inspire local residents to reduce stress through brain fitness, life balance and compassion for those with persistent mental health challenges.

Participants are asked to make a pledge to brain fitness by committing to getting seven hours of sleep nightly, as well as eating fruits and vegetables daily and getting least 30 minutes of physical activity a day. They are also asked to focus on finding calm in a quiet place and spending time with loved ones.

Mental health challenges affect more people than you might think. According to the National Institute on Mental Health, 1 in 4 people in Palm Beach County, approximately 330,000 people, have a mental health disorder. And Palm Healthcare Foundation says that despite the fact that 80 percent of Americans will develop a mental illness that could be diagnosed at some time in their lives, Florida ranks 49th among the 50 states in the country for behavioral health.

Marge Sullivan, vice president of communications, Palm Healthcare Foundation, Inc. says the foundation hopes to chip away at the long-held stigma against talking about and recognizing mental illness and mental health challenges. During a planning meeting for the campaign, she said that within minutes “everyone was so open, and said ‘I have a relative who had schizophrenia,’ or ‘My brother struggled with drug abuse’ or ‘I have anxiety.’ It really opened our eyes.”

For Jill Merrill, 57, who now lives in West Palm Beach, working on “Train The Brain” means that they might be able to help another family prevent what her husband went through. “One way to honor him was to start an open dialogue. We need to have the conversation.”

Since John’s death, the family had collected donations in his name and waited “for a perfect partner” to help keep that conversation going. They believe that the campaign, which asks participants to examine the connection between stress and physical and emotional issues, is that partner, primarily because it not only gets people to talk about such issues but offers practical solutions.

“There is a stigma attached, and by telling this very personal story, we want to reduce that,” says daughter Jessica Merrell, 33. “We want to focus on mind, body and soul. You can’t just look at the body. We want people to see brain fitness as important.”

As part of the campaign, the foundation is also offering courses in mental health first aid, where laypeople can learn “to identify someone who might in in crisis, and how to handle it,” Sullivan says.

The Merrells say that they know first-hand that it might be hard to identify such issues, because “There’s a stigma of a mentally ill person as a a homeless person walking down the street,” Jessica Merrell says. “We are a normal middle-class family, so connected to the community, and we couldn’t figure it out. How many people are without resources, who don’t know what to do? Wedidn’t know what to do.”

On the surface, John Merrell was the last person one might expect to be battling emotional or mental issues.

“My husband was the light of the room.,” says Jill Merrell. “He had a great attitude, and was incredible.”

But suddenly, in the fall of 2011, his family noticed a change in his mood and personality, and the former extrovert, “who was always the one to say ‘Let’s do this, let’s do that’, the guy who wanted to do everything, didn’t want to do anything. He started to shut down.”

Although it’s always difficult to pinpoint where these things start, the Merrells say there were some possible factors, including an accident Jill had that resulted in a traumatic brain injury, and the Alzheimer’s diagnosis of John’s mother, as well as his long-term depression and an anxiety disorder.

“Half of what we’ve told you, we didn’t know,” Jessica says. “Looking back now, you can look at pictures and see it in his face.”

John and the family sought help but, sadly, it did not prevent his death. There’s no sense, of course, in beating oneself up about cues you think you missed, signs you didn’t recognize.

What they want to do now, through the “Train The Brain” campaign, is to encourage themselves and others to recognize triggers, like stress.

As the owner of a gym, Jessica is reminded of how people who want to lose weight look for the elusive “‘skinny pill, and there isn’t one. Everyone realizes you just can’t take something. I think we’re still in the 1990s of mental health, comparatively. There’s a lot of steps you have to take.”

The Merrells are excited that the Train The Brain campaign might be able to make a difference with other families.

“If we can make a difference in one person’s life, we would have honored John’s memory,” Jill says. “We just all want to do something that will hopefully make an impact.”